Have you ever wandered into a department store to shop for fragrances? What you’ve most likely come up on is a world of scents that you can smell, along with a cup of coffee beans. The salesperson would then have you smell the cup of coffee beans between each fragrance that you sampled. This trick has actually been used for quite some time and has often been the subject of lackluster tests by universities out to debunk what appears to be a myth. The important thing to remember is that coffee beans don’t actually refresh the ability for you to smell the pleasantness of an odor, but rather the intensity.

It wasn’t until about 20 years ago that department stores realized the true potential for colognes and other fragrances and how much people wanted them. That being discovered, each major department store worked to make sure that their fragrance department was properly stocked with a variety of options from major fashion and fragrance manufacturers. Shortly after the boom in fragrance sales, it became clear that people’s nostrils were being overwhelmed when shopping and something needed to be done about it. 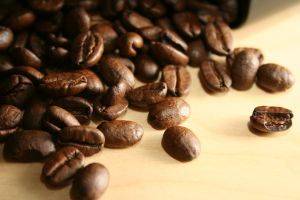 Coffee has quite the subtle aroma that’s easy on the nostrils, and allows your sense of smell to stay open. A quick dip of your nose into a cup of non-grinded coffee beans helps to allow scents to flow freely between the air and your nose. Most people think that this allows you to grasp an odor better, but the issue isn’t about being able to smell, it’s about how much you can smell.

A study by UC Berkeley Scientist Noam Sobel showed that there was no actual restriction on how well a person could smell a particular odor whether they breathed in air or coffee beans between each scent. What was restricted was how much of it someone could smell. For example, if you smelled a series of perfumes, and stood 10 feet away from another scent, a person who smelled coffee beans prior to doing so would have an easier time picking up the scent initially.

So is it even that department stores have you smell coffee beans to improve your sense of smell? We think not. Actually, the most likely reason that they practice this is that smelling dozens of aromas in a row can often be highly irritating to your nose, so to prevent that irritation, the coffee beans are used to relax your nostrils. So next time you go fragrance shopping, keep this in mind and make sure you give your nose the proper conditioning before you make your final decision.

Super User has not set their biography yet

By accepting you will be accessing a service provided by a third-party external to https://buyonlinefragrances.com/

The World of Oriental Fragrances
Buy Online Fragrances
There are several different perfume classifications that most, if not all products fit into in some way or another. While the style of each has somewhat changed over the last several years, the basic ...
5355 hits
1 comment
Read More
31 August 2012

Paying the Price
Buy Online Fragrances
Have you ever been approached by someone at the mall who invites you over to their car which is stuffed with boxes of perfume. They then proceed to tell you how you can buy name brand perfume at a fra...
1835 hits
0 comments
Read More
14 August 2012

Buying Fragrances Online
Buy Online Fragrances
Fragrances, perfumes and cologne are pleasant for both women and men. Most people appreciate the smell of quality fragrances to help the people around them appreciate there desired smell. Buy Online F...
1716 hits
0 comments
Read More